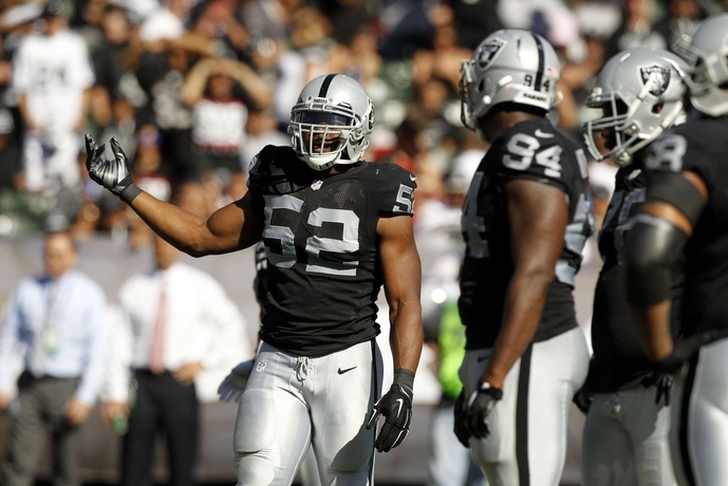 The Oakland Raiders picked up a season-defining 15-12 win in Denver this past Sunday, and they're riding a HUGE wave of momentum into this Sunday's home game against the Green Bay Packers. Get your wallets out, Raider Nation. Oakland's winning this one straight up. Here's our list of 3 Reasons Why You NEED To Bet On The Raiders To Beat The Packers.

We've watched highlights of Mack's five-sack performance against the Broncos about 12 times over the past few days. It was that dominating and that fun to watch. He's got an NFL-best 14 sacks on the year, and he's going to have a field day against a Packers offensive line that's played hide-and-go-seek all year long.

Excited for an encore to last week? We're sure Mack is.

2. No Effect For Eddie Lacy

The Packers RB has found his groove over the past month, but the Packers won't be able to ride him against the Raiders. Oakland has held opponents to less than 100 yards on the ground in eight of their past 11 games. They've given up just 55.7 per game over the past three, including holding the Broncos to a season-low 34 last Sunday.

Green Bay is going to have to lean on the pass, and while Aaron Rodgers can always shoulder the load, Khalil Mack is going to have a lot of fun teeing off on him with the Packers forced to throw over and over.

After losing three out of four, it appeared the Oakland Raiders were headed for a late-season spiral all too familiar to the members of the Nation. However, a win like the one Oakland had in Denver this past week is the kind that turns a team's luck completely around. Did you see the guys on the sideline grinning like pee-wee level players looking forward to a pizza party? Sunday's win is just the beginning of what's going to be a HUGE final statement heading into the offseason.

Plus, the Raiders are still mathematically alive for playoff contention -- two games out of a Wild Card with three to play. Until the fat lady sings...