3 Reasons Why The Raiders Will DESTROY The Lions 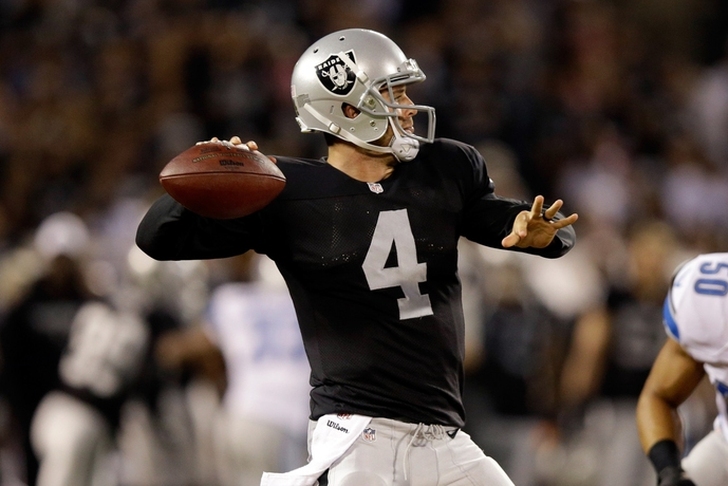 The Oakland Raiders are reeling after tough losses to the Pittsburgh Steelers and Minnesota Vikings, but Sunday's road game against the Detroit Lions provides a major opportunity for the Raiders to get back on track in emphatic fashion. Here's 3 Reasons Why The Raiders Will DESTROY The Lions.

Derek Carr is the ringleader of an offense that combines size, speed and elusiveness which consistently baffles and stretches defenses to the breaking point. This is not the same Detroit Lions defense that ran roughshod over the NFL last year. This is a VERY vulnerable D who is prone to falling apart against teams with top-level athletes on offense.

2. Charles Woodson's Got The Boys Ready

Woodson is the defensive MVP of the NFL season's first half. Anybody who tells you any difference is either blind or a liar. His five interceptions lead the NFL, and that's only a portion of his impact. The 39-year-old is leading by example, turning a cast of castoffs and unproven commodities in the secondary into one of the most opportunistic units in all of the league. Matthew Stafford is getting picked, and it's likely going to happen multiple times. That's the type of roll this secondary can get on with everything clicking.

The Raiders are 4-5, but they're still in the playoff race and they're and just starting to get the respect they deserve for their turnaround under Jack Del Rio. The momentum this team is building, two-game losing streak or not, has those who formerly cracked jokes at Oakland's expense eating their words. The great feeling around the Raiders locker room is undeniable, and their desire to make a statement will carry them in Sunday's showdown. Oakland won't be content with escaping Detroit with a win. They're out to beat down a bad Lions team and separate themselves from the AFC Wild Card muck as a true playoff contender.