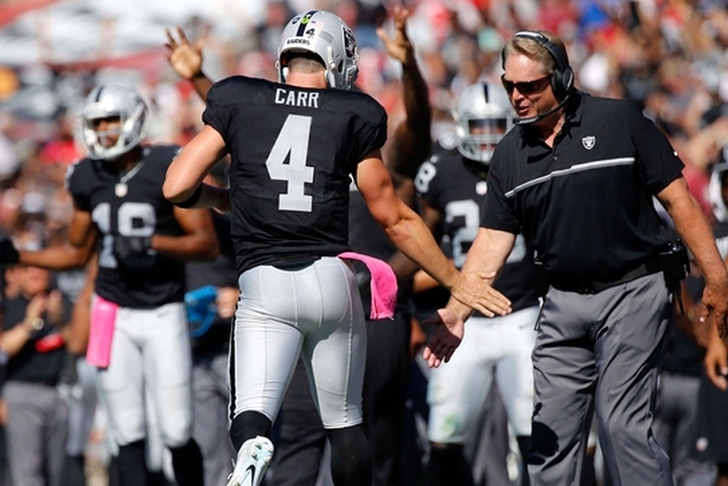 The Oakland Raiders are tied for first place in the AFC and are coming off a bye week, giving them plenty of time to prepare for Monday night's game against the Texans in Mexico City. Some are picking the Texans to pull the upset, but we know better than that. Here are three reasons why the Raiders are guaranteed to beat the Texans:

3) Houston's road woes
While Monday night is a neutral-site game, the Texans have really struggled when playing away from home. They're a perfect 5-0 at Reliant Stadium, but are just 1-3 everywhere else - and that one win came over a bad Jaguars team. It certainly wouldn't be a surprise if Houston struggled again.

2) Oakland's explosive offense
Led by quarterback Derek Carr - who is at the forefront of the MVP conversation - the Raiders have an explosive offense that few in the league can match. They in the top five in both points and yards, and have scored at least 30 points in four of their last five games.

Houston simply will not be able to match scores with them. They rank 29th in the league in points and dead last in passing, meaning they will be unable to exploit the holes in Oakland's secondary. All of that points to a huge advantage for the Raiders.

1) Brock Osweiler's struggles
The biggest reason why the Texans struggle offensively is due to the play of Osweiler. He has struggled this season, completing just 58.6 percent of his passes for 11 touchdowns and nine interceptions, and has seen his play diminish of late. His worst performance came just last weekend, when he passed for just 99 yards against Jacksonville.

Now, Osweiler throws it fine when he has a clean pocket, but if he encounters any pressure, his play dips very dramatically. With Khalil Mack and Bruce Irvin coming off the edges, the Raiders will have pressure in his face all game. Expect Osweiler to have another bad performance on Monday.