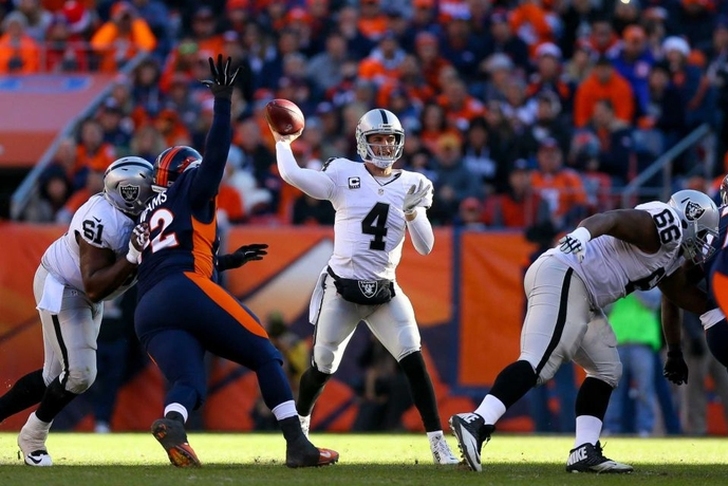 The Oakland Raiders have been one of the biggest surprises of the NFL season, going 6-2 through the first half of the season. Now they have a matchup with the Broncos for first place in the AFC West on the line. Denver enters the game as the favorite, but the Raiders are the team that will emerge victorious. Here are three reasons why:

3) Denver's lackluster offense
The Broncos rank in the bottom half in the league in both passing and rushing, which created problems for them during their two-game losing streak earlier in the month. If you recall, Denver's lack of explosiveness on offense allowed Oakland's pass rush to tee off on the quarterback - resulting in five sacks from Khalil Mack. It could be a similar game for the Raiders this time around.

2) Derek Carr, MVP candidate
Carr had largely flown under the radar for most of the season - that is, until his 513-yard, four-touchdown performance in an overtime win against the Bucs threw him into the spotlight. He ranks in the top five in the league in both passing yards (2,321) and touchdowns (17), making him the perfect candidate to have success against Denver's secondary.

1) Oakland's ability to win close games
The Raiders have been in several close games this season, and each time, they've managed to make the clutch plays necessary to get the win. Five of their six wins have come by a single possession, three of which came by three points or less. This game will undoubtedly be another close one given the talent level on both sides, and Oakland (particularly Carr) has proven to be extremely clutch. We aren't so sure about Trevor Siemian.