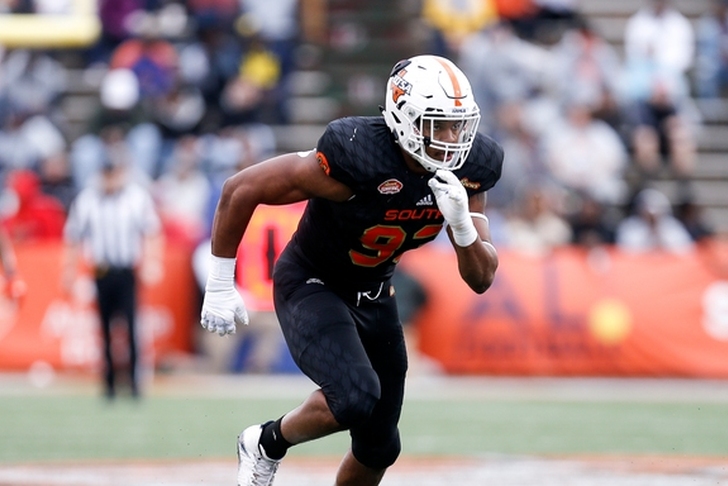 The 2018 NFL Draft is two weeks away and the Raiders rumors surrounding who the Oakland Raiders will select with the 10th overall pick continue to grow. Oakland has plenty of holes to fill, especially on defense and to make sure they don't suffer another 6-10 season they need to make solid use of their 11 picks in the 2018 draft. Here are three players the Raiders should avoid in the first round of the 2018 NFL Draft:

Guice is a powerful runner with some wiggle to him, a great running back in a tough built for the Raiders offense. Despite my praise for Guice, the Raiders brought back Marshawn Lynch and signed Doug Martin this offseason. Guice led the Tigers with 237 carries, 1,251 rushing yards, and 11 TDs last season, but battled injuries for most of the season. There are plenty of talented running backs in this year's class and Oakland has bigger needs than finding a new running back.

He is tall and long-limbed combined with his athletic ability is why NFL teams are falling in love with him. In his final season, he recorded 55 tackles, 17.5 TFL, 8.5 sacks, and three forced fumbles. What scares me about Davenport is his competitive edge or desire to be great. He has a laid-back personality and at the Senior Bowl didn't handle the spotlight well, which may be an issue once he gets to the NFL.

A big concern for the Raiders entering the season is their talent and depth at the linebacker position. Jefferson has the tools to be a solid linebacker against both the run and in coverage, but at the 10th overall pick is a bit of a reach. Jefferson led the Longhorns in tackles, tackles for loss, and sacks, but the Big 12 is far from the NFL.