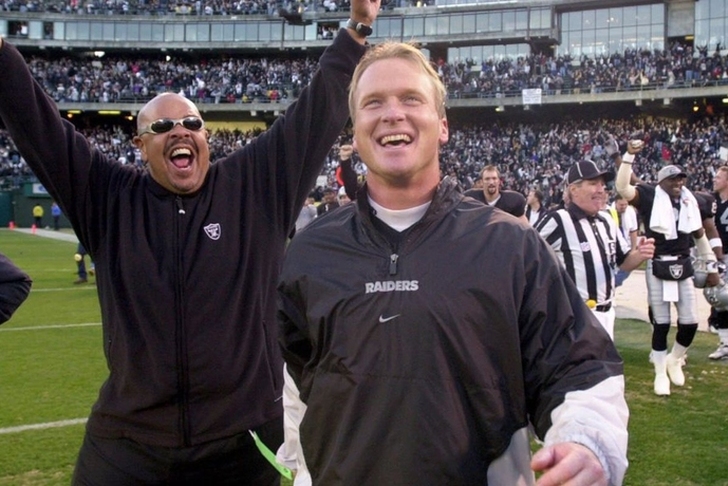 The Raiders rumors have been full steam ahead this offseason with free agency targets, NFL Draft debate, and the hiring of new head coach Jon Gruden. The Oakland Raiders finished 6-10 and after a frustrating year, it's time to move onto 2018. Oakland has a lot of talent on the roster, but they need to have a successful offseason to propel them into a successful regular season. Here are three moves the Raiders need to make to advance to the playoffs in 2018:

1.) Buy Into Jon Gruden
The team as a whole needs to move under the wing of head coach Jon Gruden and his staff. The Raiders hired Gruden as their head coach and it's time to go all in. Gruden is a well-respected coach, especially with quarterbacks, and needs to start building a team that is feared for many years to come. Look at teams who "buy in" to the system. The Patriots are the poster team for buying into the system, but a recent example is the Eagles. Teams who had no hope entering the season, but leave 2017 with sky-high expectations entering 2018. When a team buys in and has its mind set on one common goal, this is when progress is made.

2.) Draft A Linebacker
Linebacker Khalil Mack is the muscle on the Raiders defense and is arguably their most important player on the team (minus quarterback Derek Carr). Yet, he can't do it alone and the Raiders are in desperate need of adding a linebacker to this defense. The Raiders played undrafted free agent rookie Nicholas Morrow for most of last season and that needs to change in 2018. Adding a talented player such as Georgia's Roquan Smith or Virginia Tech's Tremaine Edmunds to replace him would be a huge upgrade to this defense.

3.) Sign CB Trumaine Johnson
The Raiders need help at the cornerback position after cutting David Amerson and they are expected to cut Sean Smith. The Raiders are competing with the 49ers for Trumaine Johnson who is regarded as the top corner on the market. Johnson had 65 tackles, two INTs, one FF, and one TD in 2017. His market value according to Sportac is around $13.6 million per year, which means the Raiders should be able to sign him. Adding Johnson to the Raiders would be a huge lift for a team that struggled to cause turnovers last season.