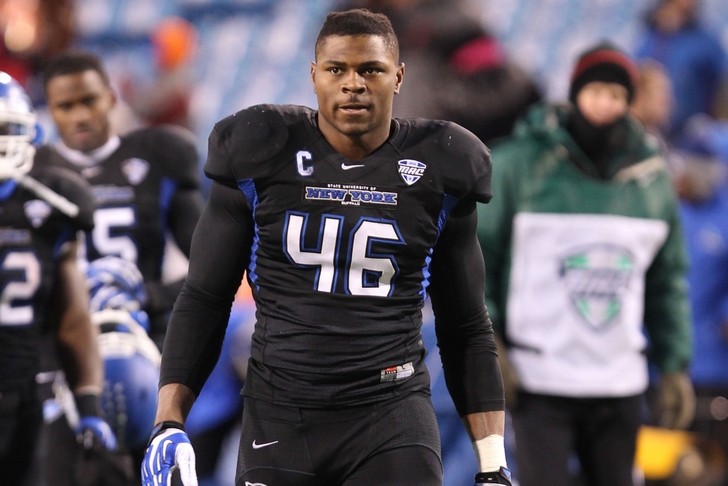 With the fifth overall pick in the 2014 NFL Draft, the Oakland Raiders have selected LB Khalil Mack out of Buffalo.

Despite Buffalo providing the only offer he received from an FBS school, the former high school basketball player made due as a three-time all-MAC selection at outside linebacker. Mack burst onto the national scene in 2013 as a Butkus Award finalist – posting 100 tackles (19 for a loss), 10.5 sacks, five forced fumbles, three interceptions (two for touchdowns), and seven passes defensed. Mack showed his next-level athleticism at the Combine, ranking in the top-tier for linebackers in the 40-yard dash (4.65 seconds), the 20-yard shuttle (4.18 seconds), and the vertical jump drill (40”).

Mack is extremely quick on the first step, ending up in the backfield sometimes with limited resistance from offensive linemen. Mack’s football instincts are outstanding, as he can located the ball seemingly at any time against any blocking scheme. His body control and bend are superb, and his balance makes it extremely tough to get him on the ground – or even to neutralize him at all. Add in a superb motor and a no-quit attitude, and Mack’s athleticism amplifies itself no matter if it’s against the run or the pass.

Check out Mack's highlight video for a closer look into what he brings to the Raiders: