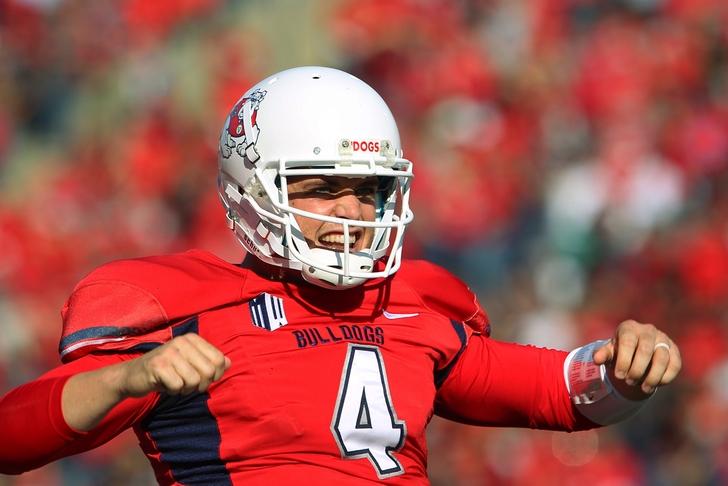 With the 36th overall pick in the 2014 NFL Draft, the Oakland Raiders have selected Derek Carr out of Fresno State.

The brother of former #1 pick David Carr, Derek Carr won the Mountain West Offensive Player of the Year award for the second-straight season in 2013 -- becoming just the fourth quarterback in FBS history to throw for more than 5,000 yards and 50 touchdowns in a season. He is also the first QB in Fresno State history to throw for 3,000 yards three times. He showcased top-tier speed for a QB in both the 40-yard dash (4.69 seconds) and the 20-yard shuttle (4.20 seconds) at the NFL Combine.

Carr boasts great athleticism and good footwork, creating after the pocket collapses with both accuracy and solid playmaking ability. He can make any and all throws both on the run and in the pocket, along with altering his throwing motion in order to adapt to oncoming defenders. Carr’s enthusiasm is infectious on-the-field and draws the most out of everyone who plays with him. His advanced maturity level will serve him well in the jump from the collegiate level to the pros.

Check out Derek Carr's highlight video for a closer look into what he brings to the Raiders:

For all the latest Oakland Raiders draft news, check out our draft page.