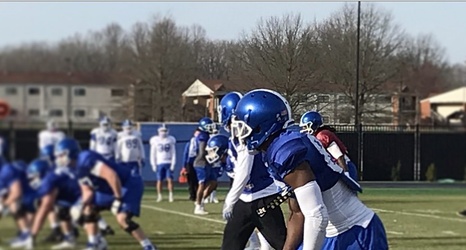 Two young wideouts were prepared to make big plays, B.J. Alexander and Josh Ali. After getting his toes wet as a sophomore, Ali has developed into a crisp route-runner that finishes strong. He caught a pair of nice passes near the sideline, but none were as spectacular as Alexander’s one-handed grab. Take a look for yourself:

While Ali transforms into UK’s No. 2 pass-catching weapon, Alexander is one of three second year players, along with Allen Dailey and Bryce Oliver, who are trying to crack the rotation. At 6’4,” Alexander probably has the most potential, but right now he’s working through mistakes.