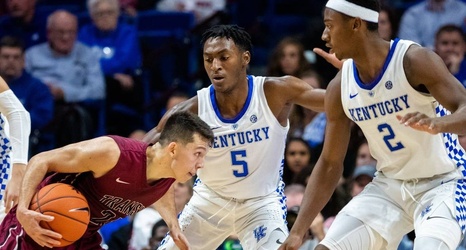 More than once during the preseason and first month of the season, John Calipari likened his current Cats to Kentucky’s team in 2013-14. Multiple freshmen starting and force fed the responsibility that goes with prominent roles. Disjointed play. Poor records away from Rupp Arena (6-7) and against ranked opponents (1-6).

Then came a happy ending in the NCAA Tournament. Credit went to Aaron Harrison’s clutch shooting and the tweak hyped repeatedly by Calipari (Andrew Harrison discovered the benefit of passing to an open teammate on the wing after drawing defenders with a drive into the lane).