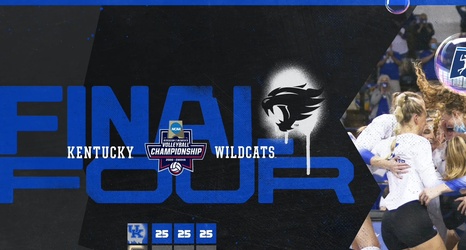 The Kentucky Volleyball program is making history, earning its first-ever trip to the Final Four last night with a 3-0 win over Purdue.

The Volleyball Cats won in convincing fashion over the Boilermakers, continuing the trend of dominant postseason victories.

The Wildcats will now have a couple days off before taking the court against the sixth-overall seed Washington (20-3) on Thursday.

It’s going to be a tough road in the Final Four for the Wildcats. The top-seeded Wisconsin Badgers sit on the opposite side of the bracket, along with fourth-overall seed Texas.

But the Wildcats are on a roll, and there’s a lot of excitement around this postseason run.