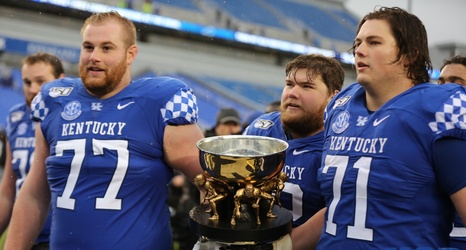 Lynn Bowden is a dynamic weapon and is a serious force to be reckoned with. Still, there is no way Kentucky’s offense could have survived this season, much less won seven games, without an impressive year by UK’s offensive line. The first words out of Bowden’s mouth Saturday afternoon in his post-game interview with the SEC Network revolved around thanking his O-line. Kentucky’s most visible star wanted to shoutout one of the team’s least-visible groups.

Not only did Bowden circle back to praising his O-line during his post-game press conference, but he doubled down.

“Whenever I get rich, I’m going to take them out to dinner, and we’re going to spend as much money as they want,” Bowden told reporters.