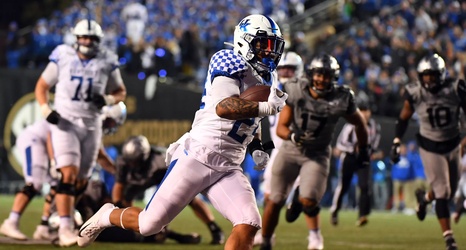 Kentucky’s offense has faced a few struggles since turning to Lynn Bowden as Quarterback, but things were clicking offensively for the Cats in Nashville yesterday as the Cats easily defeated the Commodores 38-14.

Kentucky was able to put up yards last week in a home loss against Tennessee, but struggled to find the end zone, hitting paydirt just twice. Yesterday, the Cats were locked in and reached the end zone on five consecutive drives to give Kentucky the win to pull its record to 5-5 headed into the final two games of the season.

It wasn’t just Bowden who found success against the Vanderbilt defense, although Bowden did have a solid performance with 104 yards passing and a touchdown to go with 110 rushing yards and another touchdown.