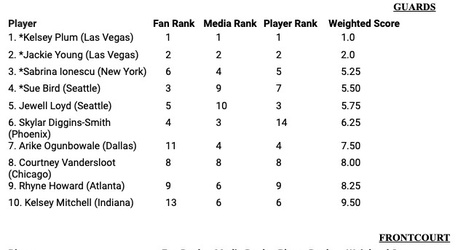 Rhyne Howard wasn’t among the 10 starters named to the 2022 WNBA All-Star Game on Wednesday, but she’s in an excellent position to secure one of the remaining 12 reserve spots.

The Atlanta Dream rookie finished with the ninth-best weighted voting score among all WNBA guards, coming in ninth in the fan rank, sixth in the media rank, and ninth in the player rank. Fan voting accounted for 50 percent of the overall vote while the media and players accounted for 25 percent each.

The league’s head coaches are set to decide the final 12 reserves, which will be announced on Tuesday, June 28.