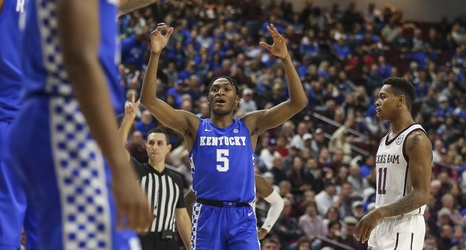 Tuesday brought the announcement of the Southeastern Conference’s regular season honors and just like most previous years, Kentucky cleaned up in the coaches’ voting as the champions of the SEC for a record-49th time this season.

While Arkansas’ Mason Jones and Mississippi State’s Reggie Perry shared the Associated Press’s SEC Player of the Year award, sophomore guard Immanuel Quickley was named the fourth Wildcat in John Calipari’s 11 seasons at Kentucky (five if you included AP honors) to be named the player of the year in the SEC by the coaches.