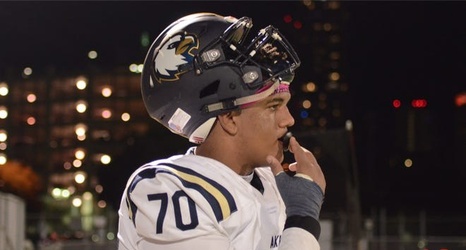 Akins senior Nikolas Hall signed a letter of intent Wednesday with the University of Kentucky, becoming the first football player from his school to join a Power Five conference.

The 6-foot-7, 305-pound offensive linemen already has ties to Kentucky. His father, Antonio, was an offensive lineman for the Wildcats in the early 1990s. His mother, Candice Shipp, ran track at Kentucky.

Nevertheless, Hall said he wasn't convinced he would choose Kentucky until he paid a visit to the UK campus in the summer. He already had received offers from 15 major colleges, including Auburn, Texas Tech, Baylor, Colorado and Ole Miss.