Mark Stoops plans to be at UK next year, and more postgame quotes 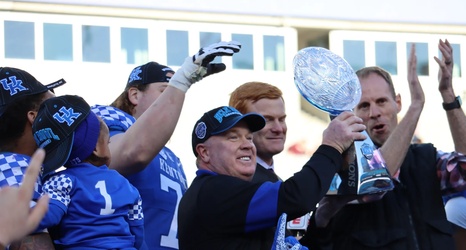 For the second time in my lifetime (32 years), the Kentucky Wildcats have finished a regular season with nine wins.

Following a 52-21 demolition of the Louisville Cardinals in the Governor’s Cup, Mark Stoops and the football Cats finish the 2021 regular season with a 9-3 record.

After not finishing as good as 9-3 since 1977, has accomplished that feat twice in a four-year span under Mark Stoops. I’d say he’s doing a pretty good job as the head man in Lexington.

After the win, Stoops hopped on the KSR postgame show and was asked about his status for next season as rumors of the LSU Tigers’ interest persist.