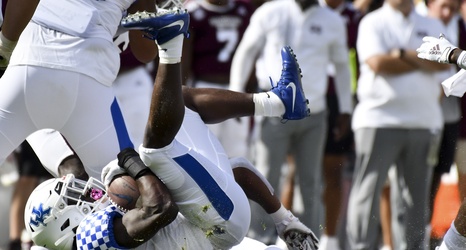 In the first half, I don’t think you could describe what Kentucky did in Starkville as “football.” An ugly affair, Mark Stoops’ team put the embarrassing 30 minutes in the past to mount a valiant second half comeback. Unfortunately, it was too little, too late.

Mississippi State weathered the storm and played stout in the red zone to hold off Kentucky for a 28-13 at Davis Wade Stadium.

A pick six from Sawyer Smith on the fourth play of the game immediately put Kentucky behind the eight-ball. The Bulldogs surged to a 21-3 lead before the Cats showed any life.