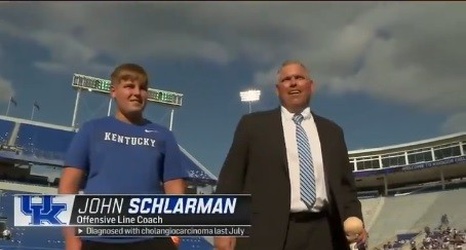 The UK football team suffered a tragic loss this morning as assistant coach John Schlarman lost his battle with cancer.

Schlarman, who was last seen publicly in the UK locker room after the Wildcats defeated Tennessee, has been battling cancer for two years.

LEXINGTON, Kentucky – John Schlarman, assistant coach for the University of Kentucky football team and an All-Southeastern Conference offensive lineman during his playing days at UK, died Thursday following a two-year battle with cancer. He was 45.