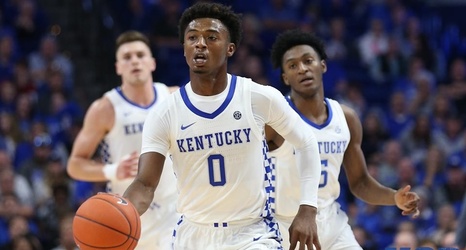 With less than a week until the season tips off, pundits across the interwebs are doling out their college basketball predictions. In ESPN’s SEC Preview, Jeff Borzello, Myron Medcalf, and John Gasaway all said they believe this Kentucky team can make a Final Four, each comparing them to a different John Calipari squad.

Medcalf likened this team to the 2015-16 squad featuring Tyler Ulis, Jamal Murray, and Skal Labissiere, but said Nate Sestina could add another dimension.

“But this group might be similar to the 2015-16 squad because this is a team that should be wing-centric, I think, with Ashton Hagans, Immanuel Quickley, Tyrese Maxey and Kahlil Whitney as catalysts while employing enough length, albeit without a dominant post presence, to challenge shots around the rim (the 2015-16 squad held opponents to a 42.