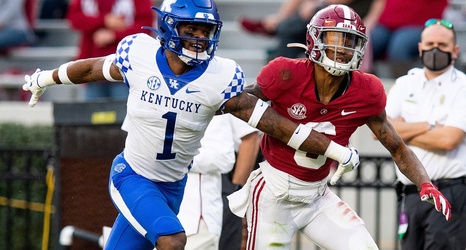 LEXINGTON — Make it 2 for 2 for Kentucky football in the first two rounds of the NFL draft.

The Dallas Cowboys selected Kentucky cornerback Kelvin Joseph with their second-round pick in the 2021 NFL draft Friday. Joseph follows former UK teammates Jamin Davis (Washington, first round) as being selected in the draft.

A former top-50 recruit, Joseph transferred to Kentucky from LSU prior to the 2019 season. He sat out the 2019 season per NCAA transfer rules then made his debut as Kentucky's starting cornerback in the delayed 2020 season.

Joseph lead Kentucky with four interceptions, including one that he returned for a touchdown in the Wildcats' first win at Tennessee since 1984.