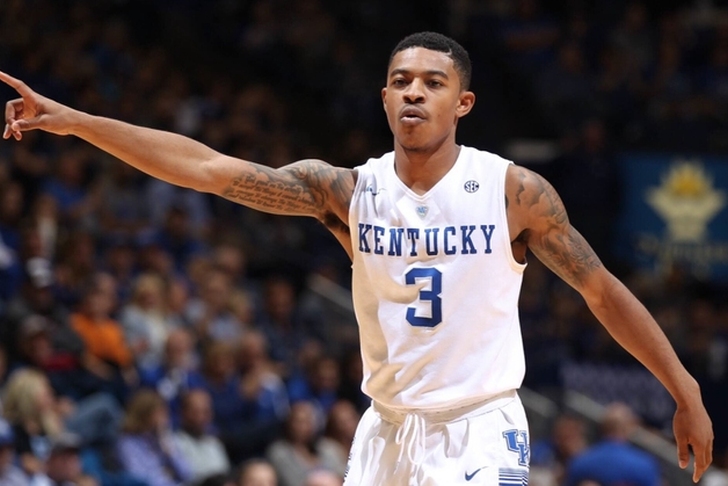 Tyler Ulis is not a big player. At just 5-foot-9, 160-pounds, the Kentucky Wildcats' sophomore point guard is downright undersized. But that hasn't stopped Ulis from putting up big numbers in season that head coach John Calipari believes should put him in the conversation for National Player of the Year.

"I think it’s beyond just SEC Player of the Year, which obviously, his name should be mentioned," Calipari said according to Kentucky Sports Radio. "I’m like looking at Player of the Year. When you talk about what he’s been able to do for us and what he’s done in these games, it’s incredible. Let me say, he’s got numbers that you don’t see but every five to ten years ... I just think he should be in the mix for Player of the Year nationally. There’s probably four or five other guys, but he should be one of them."

In his last game out, Ulis had 27 points and 12 assists in UK's easy win over South Carolina.

"I told him before South Carolina, it’s a 15-assist game because of how they play, they collapse," Calipari said. "Well, he got 12 assists, yet he still scored. He defends."

This year, Ulis is averaging 16.7 points per game, 6.7 assists and 3.1 rebounds. The best part for UK is that Calipari believes Ulis is still getting better.

"He’s getting better," Calipari said. "He’s better now than he was a month ago. Not only is he better, he’s shooting the ball better, his efficiencies have gone way up. Now, I’m just looking for him to continue to grow. Where can we take this thing? How much better can you get on both sides of the ball?"

Ulis' next game for the 19-6 Wildcats comes Thursday against the Tennessee Volunteers.

Follow our Kentucky Wildcats team page for all the latest UK news.