Here Are 3 Reasons Why Kentucky Can Win The National Championship 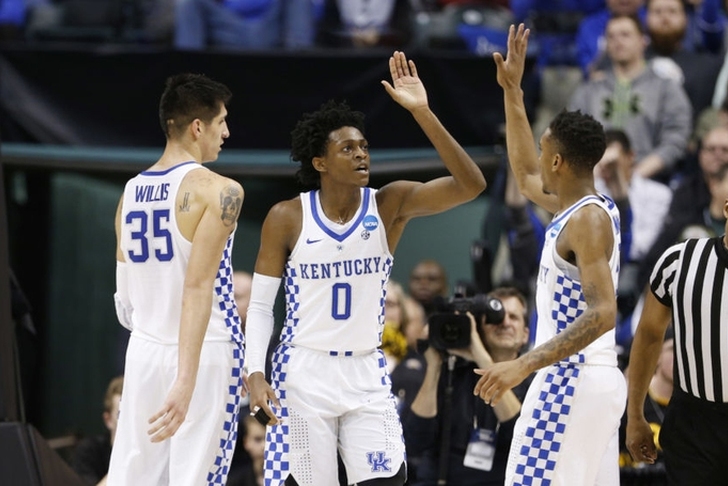 The Kentucky Wildcats are one of a handful of true championship contenders left in the NCAA Tournament. A narrow win over Wichita State put them in the Sweet 16, and they have a huge matchup against UCLA on deck. However, Kentucky has their sights set on bigger and better things - successful seasons in Lexington are only measured by national championships.

We're going through all of those title contenders and explaining why they have a good chance to be cutting down the nets in April. Here are three reasons why Kentucky could be that team:

3) Bam Adebayo
Adebayo is a physical freak (6-foot-10, 260 lbs.), but his production over the course of the regular season (13.3 ppg, 8.1 rpg) didn't exactly mirror how athletically superior he is on the court. Well, he's finally starting to show that dominance when it matters most. Since the start of the SEC Tournament, Adebayo is averaging 13.6 ppg and 11.2 rpg - including 14.0 ppg and 14.0 rpg in the NCAA Tournament. He is finally starting to be the interior force Kentucky expected him to be, taking more pressure off of Malik Monk and De'Aaron Fox.

2) Experienced role players
Stars carry a team, but it's often the role players that make the difference in close games. Even though Kentucky is known for being a one-and-done factory, seniors Derek Willis (shooting) and Dominique Hawkins (defense) have played extremely vital roles for this team down the stretch. And, since they're seniors, they're used to this big stage and know what it takes to win. Throw in sophomore guard Isaiah Briscoe (who is practically a senior by Kentucky standards), and the Wildcats have more experience around their freshmen stars than usual.

1) Best backcourt in the country
Speaking of freshmen, Monk and Fox give Kentucky the best backcourt in the nation. Monk is a top five pick who is an excellent outside shooter and has no problem creating his own shot off the bounce. Fox is the key that makes Kentucky's whole system go, and now that he has developed a reliable mid-range floater and pull-up jumper, he's virtually unguardable. Plus, both players have proven to be extremely good in the clutch, hitting big shots that have won the Wildcats several close games.

Elite guard play is crucial in the NCAA Tournament, making these two even more valuable.