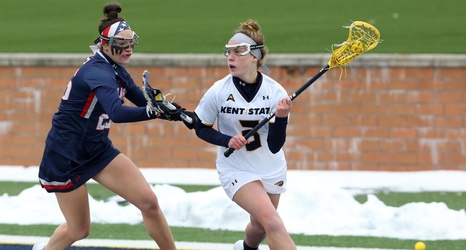 The Kent State lacrosse team jumped out to an early lead against Stetson on Friday, but struggled to hold off the Hatters offense in a 17-7 loss.

Kent State scored a minute into the game on a goal by Abby Jones that came on a assist from Kelli Bailey.

Stetson answered a minute later on a goal by Shelby Lehmann and an assist from Riley Reagan. The Hatters scored two more goals in the within four minutes. The second goal was by Hannah Mill on a from Reagan. Mill's goal was followed by a goal from Taylor Zuberer on a free position shot.