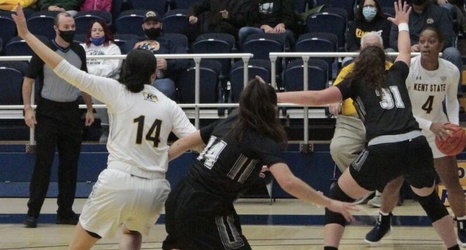 Despite a huge victory against No. 19 UCLA Friday, the Kent State women’s basketball team saw its first loss of the season to the University of Massachusetts Saturday.

The Flashes lost to UMass (7-0) 72-64 in the semifinal round of the Gulf Coast Showcase tournament in Florida.

“UMass is a good team, and it's 7-0 for a reason,” coach Todd Starkey said. “We needed to be tougher. Games plans were different, and we did a much better job executing a game plan Friday than we did Saturday.”