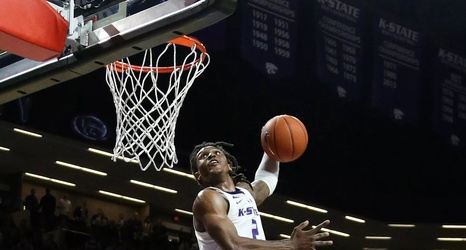 Dean Wade, Barry Brown and Kamau Stokes filled their senior “bucket” a little closer to the rim, as Kansas State beat No. 13 Kansas, 74-67, in a packed and rowdy Bramlage Coliseum Tuesday night.

Beating KU was one of several previously unaccomplished goals the three seniors wanted to achieve before graduating, and each of them contributed meaningfully to the effort. They got help from others—most especially redshirt sophomore Cartier Diarra and junior Xavier Sneed—to close the deal.

K-State (17-5 overall, 7-2 Big 12, first place Big 12), started fast behind Stokes, who found himself alone and nailed a three-pointer on the Wildcats’ first possession, then stole the ball from KU’s freshman point guard, Devon Dotson, and made a lay-up to give his team a 5-0 lead.