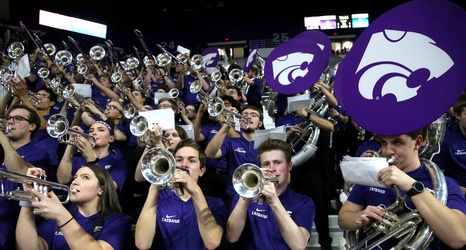 OH, WHAT A NIGHT!

Your Kansas State Wildcats did two really big things last night. Not only did they beat Kansas (which is always great) for the first time in eight tries, but with the 74-67 win the Wildcats claimed sole possession of first-place in the Big 12 (for at least 22 hours or so) and guaranteed that the Wildcats will carry at least a share of the Big 12 lead into this weekend’s suddenly huge match-up with the Baylor Bears.

It was an epic night in Manhattan, capped by two vicious dunks to end the game — both Cartier Diarra’s breakaway windmill dunk that served, basically, as the knock-out punch, and Barry Brown’s just-as-time-expired jam (that didn’t count, btw) that was built on three years of frustration against the Jayhawks (Robinett, Eagle).