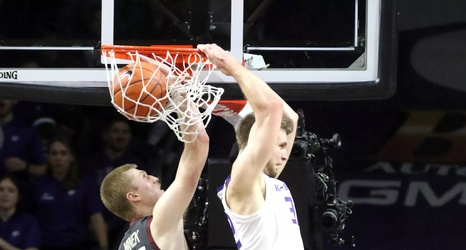 As covered here and elsewhere since Saturday’s Big 12 title-clinching win over the Oklahoma Sooners, the Kansas State Wildcats now wonder about Dean Wade’s rickety right foot and whether he will be able to contribute more to the post-season than he could last year.

On Sunday Coach Bruce Weber announced that Wade experienced some soreness after the game and that his status for the Big 12 tournament at Sprint Center was questionable. In yesterday’s coaches’ teleconference, Weber added a few layers of intrigue, saying that Dean tweaked the foot in the first half and reported discomfort, but that the medical staff cleared him to continue.