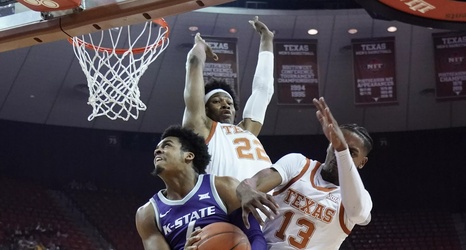 After enduring weather-delayed travel woes, the Kansas State Wildcats (7-8, 0-3 Big 12) scrapped their way through the first half of its game against the Texas Longhorns (11-4, 1-2), even exchanging the lead six times. But a last-second Texas three-pointer gave the Horns a four-point halftime lead, and the game would never be close again, as the Wildcats fell 64-50.

By now K-State fans know the question is not if there will be a scoring drought, but when it will come and how long it will last. In this game, it began after halftime and lasted exactly eight minutes.