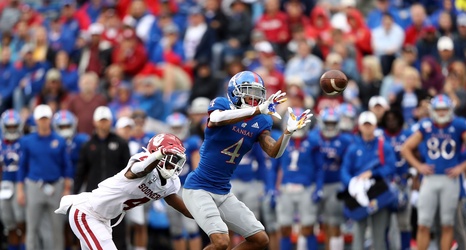 Kansas football has been up and down and up and down this season. It seems like they’ll win or at least play a competitive game, then turn around the next week and have an embarrassing performance.

After last week’s brutal loss at TCU, the Jayhawks were far from the favorite this week against Oklahoma. As 33 point underdogs, Kansas didn’t do too bad all things considered.

When the game was tied 7-7, defensive back Mike Lee dropped what would have been a pick-six had he caught the ball. Kansas players got boneheaded penalties, missed tackles, and ultimately shot themselves in the foot too many times to have a shot in this one.