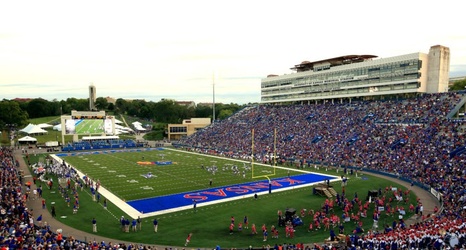 LAWRENCE, KS - SEPTEMBER 12: A general view during the game between the Memphis Tigers and the Kansas Jayhawks at Memorial Stadium on September 12, 2015 in Lawrence, Kansas. (Photo by Jamie Squire/Getty Images)

Memorial Stadium can expect fans for the first time this season for next Saturday. This afternoon, Athletic Director Jeff Long confirmed today that the university will plan to admit 10,000 fans on October 3rd when Kansas football hosts Oklahoma State.