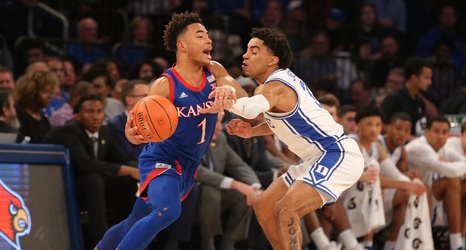 Yikes. I don't care which team you pull for, it's hard to find positives in what transpired tonight, at least offensively. Duke came away victorious in one of the roughest season openers in recent memory.

It's hard to describe the first half as anything but ugly. It's actually a testament to this year's squad that they were only down 33-30 at halftime, given their 18 turnovers. Yeah. Eighteen turnovers. Fortunately they forced nine of their own and an old hallmark of Bill Self teams - FG% defense - helped keep them in the game.

Fortunately, the start of the second half can be accurately described in much more positive terms.