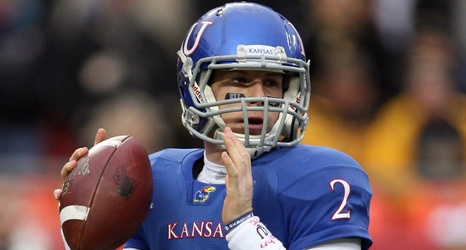 It’s not exactly a secret that Kansas has had issues at quarterback since the Todd Reesing era came to an end.

Well, really they’ve had issues at every position, but quarterback has been easily the most noticeable, due both to the importance of the position and the lack of any stability whatsoever. As we hope to see a stable plan at QB under new coach Les Miles, let’s revisit the trials and errors of signal caller position since Reesing’s last game.

We got a bad sign right out of the gate when new coach Turner Gill pulled Mark Mangino’s chosen heir to the position Kale Pick after just one half of play.