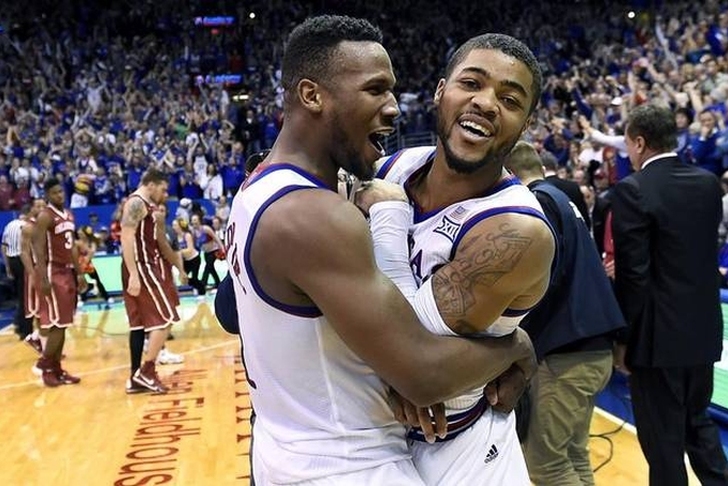 The Kansas Jayhawks have cruised to the Sweet 16 as the top overall seed in the NCAA Tournament, and now face a tough test in the surging Maryland Terrapins. Some may see this as a potential upset, but that won't be the case - this KU team won't let themselves fall victim to another early upset. Here are three reasons why Kansas will beat Maryland to advance to the Elite Eight:

3) Kansas' hot streak
We often hear in sports that the best team doesn't always win a championship, but the hottest team does. Well, luckily for Kansas, on top of being the most talented team, they are also hotter than anyone else. The Jayhawks come into the Sweet 16 on a 16-game win streak and haven't lost since Jan. 25. That's the kind of run that builds the confidence needed to win the national championship, let along get past a Maryland team that struggled to close the season (lost five of their last 10 games overall).

2) Maryland's inconsistency
For as good as Maryland can be, they don’t always show it. They haven’t beating a ranked team on the road this year, and also have a confusing loss to an 8-21 Minnesota squad on their resume. You never know which Maryland team you're going to get on any given day, which is a major problem caused by a lack of focus and lack of intensity. Kansas is a veteran team full of experienced leaders who don't let those kind of lapses happen.

1) Balanced scoring
Kansas is one of the most efficient offensive teams in the country because they have so many players capable of taking over a game. Mason, Selden, Graham, and Ellis have all recorded multiple 20-point games this season, and they have three guys that come off their bench (Brannen Green, Carlton Bragg, and Jamari Traylor) that shoot over 55 percent from the field.

Maryland can be very shaky defense, and have been known to give up long runs. If Maryland goes through another one of those lapses in this game, the Jayhawks will kill them and open up a lead they won't relinquish.