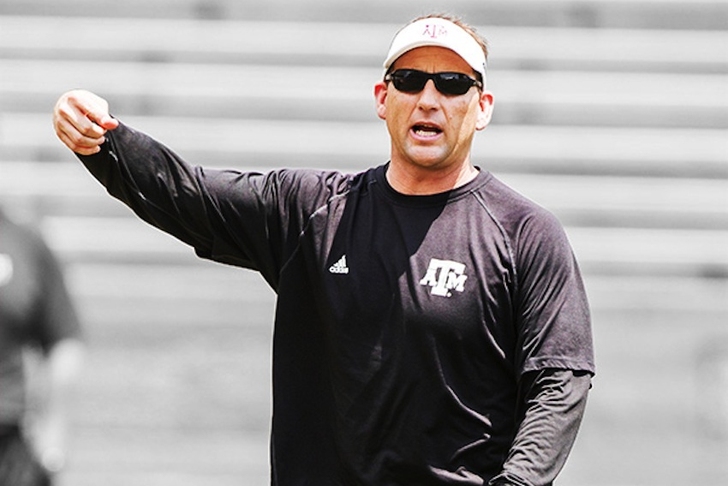 Kansas has hired Texas A&M wide receivers coach and recruiting coordinator David Beaty as their next head coach, according to FOXSports' Bruce Feldman.

His biggest accomplishments come from pulling in two top-five recruiting classes during his two years as the recruiting coordinator with the Aggies.

Beaty served under former Jayhawks head coach Mark Mangino, who coached the program to a 50-48 record from 2002-2009. He was on the staff that led Kansas to an Orange Bowl victory in 2007, which was the best season in program history.

Sources say that KU athletic director Sheahon Zenger is trying to reassemble the coaching staff from the Mangino era, just without Mangino, who left the school after they launched an investigation about alleged misconduct towards players.

Beaty will try and resurrect a program that has a 12-58 record over the past five seasons and hasn't been to a bowl game since 2008. Former head coach Charlie Weis was fired just four games into the season this year after sporting a 6-22 record in just over two seasons.

Beaty's background as a wide receivers coach would indicate that he's going to employ a pass-happy offense in his first head coaching tenure. He doesn't have a lot of experience leading a team, he'll likely employ several different strategies during his first season as he tries to figure out what works best for him.

What Can Fans Expect?

Beaty is a recruiter above all else, and the athletics department is hoping that he can bring in talented players the Jayhawks haven't had before. He's not a big-time hire that won't have ripple effects across the college football world, but Beaty will inject new energy into a program that desperately needs it.