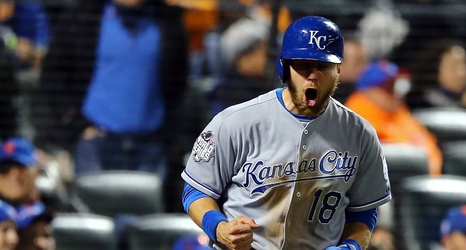 After a 30-season absence from the postseason, the Kansas City Royals came agonizingly close to winning the World Series in 2014. Some nine months later, determined to return to and win the Series, the Royals beat out other trade deadline suitors to land veteran infielder-outfielder Ben Zobrist for the stretch run. Zobrist, an instant fan and clubhouse favorite and vital component in the club’s march to a World Championship, so enjoyed the Kansas City experience that his daughter, born five days after the Series, was given “Royal” as her middle name.

But the end of the 2015 season meant free agency for Zobrist; although the Royals clearly wanted him back, the mutual admiration society that was the Kansas City-Zobrist relationship wasn’t quite enough to overcome the Chicago Cubs’ four-year, $56 million offer and a reunion with manager Joe Maddon, for whom he played at Tampa Bay.