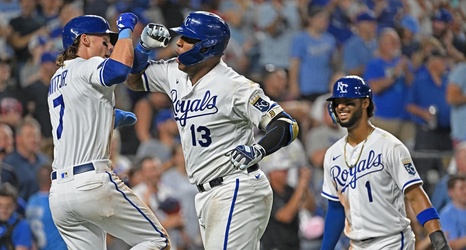 Nearly five years ago, former Royals manager Ned Yost strolled out towards home plate, with his lineup card in hand, to have a conversation with home plate umpire David Rackley.

In doing so, he removed Lorenzo Cain, Mike Moustakas, Alcides Escobar, and Eric Hosmer from the game simultaneously. It was the last time that Hosmer would play on that field for over 1700 days.

Tonight, the mad dasher played his first baseball game in front of his former home Kauffman Stadium crowd since that day. It was a special moment. And the Royals spoiled it, thanks to a late homer from Salvador Perez, taking game one of a four-game set against the Red Sox 7-3.