Royals bunt into a triple play, lose embarrassing game to the Twins 2-1 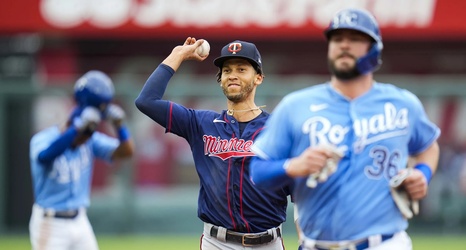 Let’s not bury the lede here: the Kansas City Royals and the Minnesota Twins played a baseball game, which the Twins won 2-1. During that game, however, the Royals hit into a triple play. This is rare enough; the last triple play the Royals hit into occurred on April 20, 2012, a game that featured the Holy Trinity of Yuniesky Betancourt, Chris Getz, and Jeff Francoeur. But today’s triple play happened in an oh-so-Royal way—via a bunt. That’s right, folks: Nicky Lopez bunted into a triple play, popping out to Miguel Sano at first and leaving Jarrod Dyson and Cam Gallagher, who were both running on the play, out to dry.