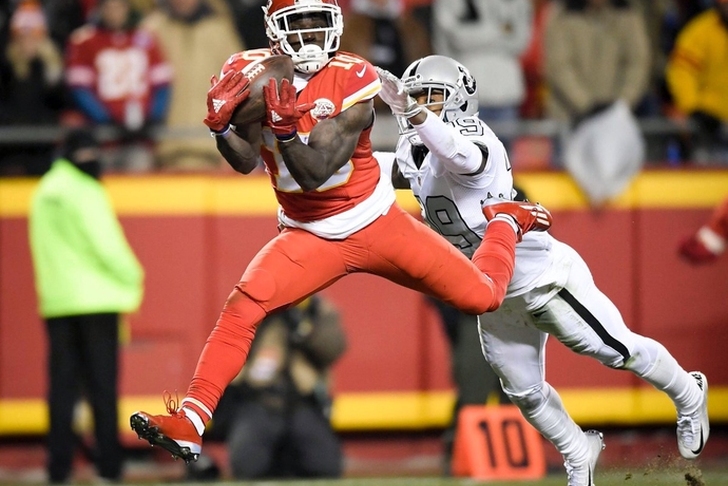 With AFC West supremacy on the line, the Kansas City Chiefs picked up a critical 21-13 win over the Oakland Raiders. The Chiefs shut down the high-flying Raiders' passing attack and benefited from a key special teams score.

All 21 points from the Chiefs came in the second quarter, giving them a 21-3 lead. But the Raiders, as they've done several times this year, didn't fold. They made a comeback effort, but their final drive in the fourth quarter was stopped on fourth down just after the two minute warning. A false start by Austin Howard made it a 4th and 6 instead of a 4th and 1 and a Derek Carr pass was incomplete. The Chiefs then ran out the clock thanks to a third down conversion.

made an effort to make comeback. But the Raiders never threatened in the fourth quarter and the Chiefs held on for the win. With the win, the Chiefs are now in control of the AFC West. They're tied with the Raiders at 10-3, but swept the season series and hold the tiebreaker.

Tyreek Hill went off for the Chiefs. He caught six passes for 66 yards and a score, plus a 78-punt return for a TD.

Travis Kelce was impressive in the passing game, reeling in five passes for 101 yards. Alex Smith finished the game 17 of 26 for 264 yards, a TD and a pick. Spencer Ware chipped in 54 yards on 19 carries.

Battling an injured pinkie finger (and the frigid temperatures), Derek Carr struggled. He completed only 17 of 41 passes for a measly 117 yards, although there were several drops. Latavius Murray had 22 carries for 103 yards and a TD, but the Raiders offense missed guard Kelechi Osemele, who was a late scratch because of an illness. Kansas City recorded only one sack, but they pressure Carr numerous times.

The Raiders will look to bounce back when they play the San Diego Chargers on the road. The Chiefs host the Tennessee Titans.