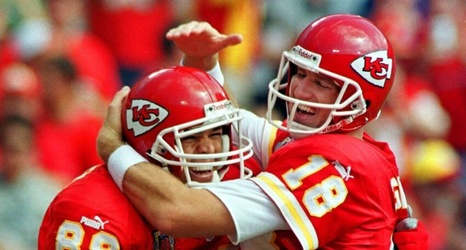 Kansas City Chiefs quarterback Elvis Grbac (R) celebrates with Tony Gonzales after throwing him a touchdown pass in the first half of their game against the Detroit Lions 26 September 1999 at Kansas City's Arrowhead Stadium. AFP PHOTO/Dave KAUP (Photo by DAVE KAUP / AFP) (Photo by DAVE KAUP/AFP via Getty Images)

Somehow the Kansas City Chiefs have been blessed multiple times over at the tight end position—much, much more so than any other team in the National Football League.

Whether you point to the man generally regarded as the single greatest TE in history in Tony Gonzalez or the current perennial Pro Bowler occupying the same position in Travis Kelce, no other franchise can boast the sort of one-two historic punch as Chiefs Kingdom.