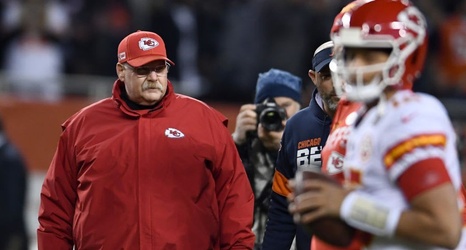 CHICAGO, ILLINOIS - DECEMBER 22: Head coach Andy Reid of the Kansas City Chiefs watches quarterback Patrick Mahomes #15 throw a pass during warmups before taking on the Chicago Bears in the game at Soldier Field on December 22, 2019 in Chicago, Illinois. (Photo by Stacy Revere/Getty Images)

Some of the NFL’s most successful teams in the last couple decades have been able to pull it off—the developmental quarterback pipeline. In doing so, they were consistently able to enjoy staying on top with a bit of security at the most important position in the league only to then ship off those assets in exchange for valuable draft selections to other quarterback needy teams.