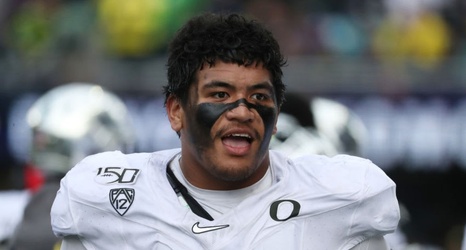 SEATTLE, WASHINGTON - OCTOBER 19: Penei Sewell #58 of the Oregon Ducks looks on in the fourth quarter against the Washington Huskies during their game at Husky Stadium on October 19, 2019 in Seattle, Washington. (Photo by Abbie Parr/Getty Images)

When discussing the K.C. Chiefs biggest needs this offseason, the consensus answer for the greatest overall on the team is, of course, left tackle. The Chiefs released longtime starter Eric Fisher, which created a large hole on the offensive line. The Chiefs have addressed needs at guard, center, and right tackle very heavily already, which has only emphasized the hole at left tackle even more as the most important position on the line remains unfilled.