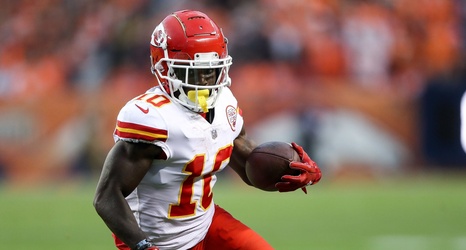 The good news: The timeline on Tyreek Hill’s absence just got potentially shorter.

The Kansas City Chiefs wide receiver left the team’s opening week game against the Jacksonville Jaguars with what was later diagnosed as a sternoclavicular joint dislocation. The immediate diagnosis was that Hill would likely miss several weeks and that a potential stint on injured reserve (with the intent to return after 8 weeks) was a possibility.

Ever since then, the timeline for Hill’s return keeps getting shorter and shorter, a good thing for the Chiefs dynamic offense. Ian Rapoport had a report on Wednesday morning that stated Hill would avoid IR and instead would likely miss four to six weeks.