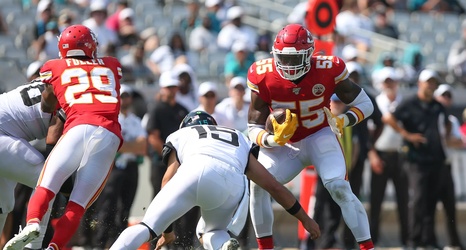 Kansas City Chiefs fans got their first look at Steve Spagnuolo’s new defense in Week 1. A 26-point outing by a rookie quarterback — 13 points of which were scored in the final 7:40 of the game — may not have been the performance some were hoping to see.

However, this is Week 1. The defense continued to use some vanilla play calls against an average offense and a patchwork offensive line. While the Jacksonville Jaguars did put up 428 yards of offense, the Chiefs defense forced two turnovers and maintained a two-score lead from the middle of the second quarter onward.