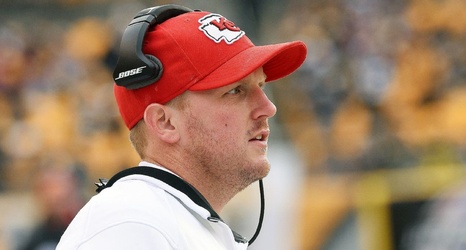 Former Kansas City Chiefs assistant coach Britt Reid has been charged with felony driving while intoxicated for his involvement in a car crash earlier this year that left a 5-year-old girl critically injured.

Prosecutors in Jackson County, Missouri, filed the class D felony charge Monday, stating that Reid "operated a motor vehicle while under the influence of alcohol, and acted with criminal negligence by driving at an excessive rate of speed."

If convicted, Reid would face a maximum sentence of seven years in prison.

The crash occurred Feb. 4, when police say Reid's truck slammed into two vehicles on the side of a highway entrance ramp near Kansas City's NFL training complex next to Arrowhead Stadium, injuring 5-year-old Ariel Young and another child inside one of the cars.