Chiefs ask much of Patrick Mahomes again, and as usual, he delivers 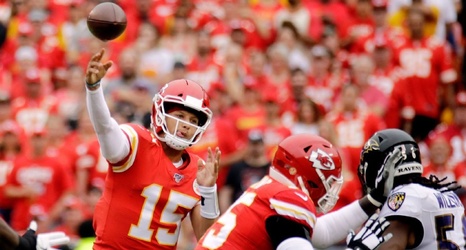 KANSAS CITY, Mo. -- The Kansas City Chiefs played without their top wide receiver, their left tackle and their starting running back and still had little problem moving the ball and beating the Baltimore Ravens on Sunday.

That’s because they received another big game from quarterback Patrick Mahomes, who threw for 374 yards and three touchdowns in the Chiefs’ 33-28 victory.

Mahomes fell short of his second straight 400-plus-yard passing game. He had 443 in last week’s game in Oakland. But he had his 13th straight game with more than 300 yards, breaking a tie with Hall of Famer Kurt Warner for the most by a player in his first 20 games in NFL history.