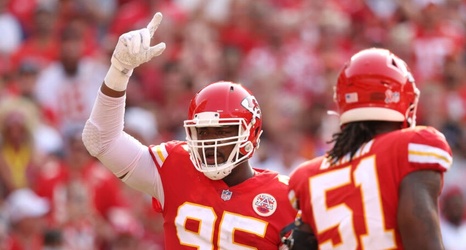 KANSAS CITY, MISSOURI - SEPTEMBER 12: Chris Jones #95 of the Kansas City Chiefs reacts during the first half against the Cleveland Browns at Arrowhead Stadium on September 12, 2021 in Kansas City, Missouri. (Photo by Jamie Squire/Getty Images)

After his much-publicized move to the edge this offseason, defensive lineman Chris Jones played his first full game for the K.C. Chiefs in his new role on Sunday against the Cleveland Browns. He did not disappoint.

The 27-year-old Jones racked up two sacks in the Chiefs’ season-opening win over Cleveland. However, we wanted to take a closer look at how he was used within the defense to get a better idea of what the team is trying to do and what Jones is capable of.