2022 NFL Mock Draft: An early look at prospects linked to the KC Chiefs 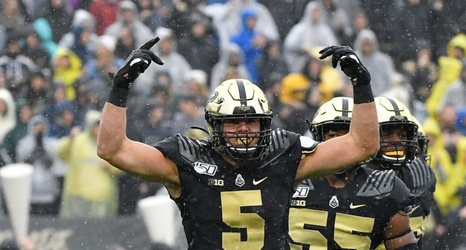 WEST LAFAYETTE, INDIANA - OCTOBER 26: George Karlaftis #5 of the Purdue Boilermakers reacts after his sack in the first half against the Illinois Fighting Illini at Ross-Ade Stadium on October 26, 2019 in West Lafayette, Indiana. (Photo by Quinn Harris/Getty Images)

It was only a week ago that the 2021 NFL Draft was unfolding before us, fulfilling the dreams of more than two hundred college football prospects. Over the course of the three-day event, the K.C. Chiefs selected six new players at myriad positions in the hopes of bolstering areas of need on the roster and providing the roster with young talent to maintain the present momentum toward continued Super Bowl contention.