Chiefs vs. Lions: 3 Things We Learned About Each Team 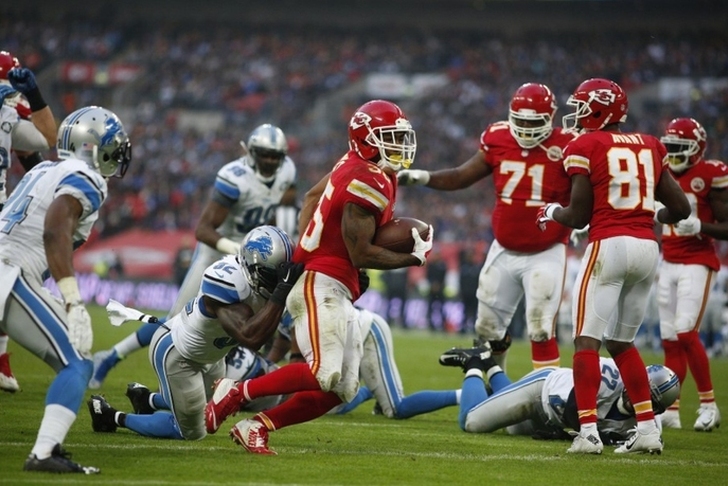 The Kansas City Chiefs knocked off the Detroit Lions today in London, pushing the Chiefs to 3-5 on the season while the Lions fell to 1-7. Here are three things we learned about each team in that game:

Alex Smith is showing signs of life. He had one of the best games of his career in this one, passing for 145 yards and two touchdowns while running for 78 yards and another score.

Charcandrick West can carry the running game. He has stepped up in the absense of Jamal Charles, running for 207 yards and two touchdowns over the past two games.

The passing game is still a work in progress. No receiver had more than 35 yards receiving in this one or caught more than three passes. The win is the nice, but the struggles of the receiving core are still alarming.

Jim Caldwell's job is on the line as the Lions are seemingly all out of answers. In the midst of this year's putrid start, Caldwell's office seat has slowly but surely caught on fire. Grumbles from the fan base have turned to full-on calls for his job, and we can't help but agree with the vocal majority.

Something's wrong with Stafford. He has been inconsistent all year long, and that's been the death knell for a Lions team that hasn't been able to run the ball with any sort of effectiveness. He needs to kick things into overdrive and start trusting his progressions more, rather than forcing balls into tight spots and trying to hit the home run on every play.

The running game is still awful. Detroit has had to throw the ball a lot because of how often they've been trailing in games, but there's no reason why they can't hit 100 yards on the ground as a team - something they failed to do again today.