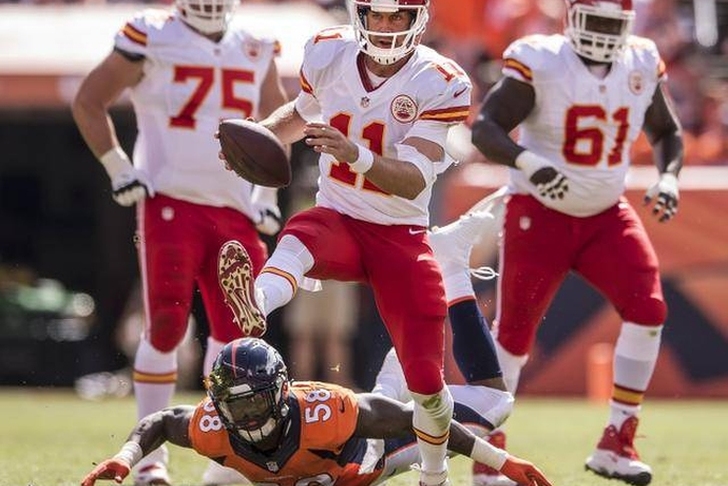 After trailing for almost the entire fourth quarter - and recording just over 150 yards of total offense for the first three and a half quarters - the Kansas City Chiefs managed to pull off an improbable comeback to get a 30-27 overtime win over the Denver Broncos.

The first half was totally controlled by Kansas City. After a scoreless first quarter, the Chiefs finally got on the board when Justin Houston's third sack of the half forced a fumble in the end zone, resulting in a safety. On the ensuing free kick, Tyreek Hill sprinted 86 yards to the end zone, giving Kansas City the 9-0 lead:

Denver would not go away, however. Trevor Siemian and their offense came to life on the next drive, going down the field and getting a field goal to make it 9-3 going into the half. Then, on their first drive of the second half, they went down the field in 12 plays to take the lead on an outstanding pass from Siemian to Jordan Taylor:

Kansas City got another touchdown of their own on the next drive thanks to a three-yard run from Hill, but the offense stalled for the rest of the game. Denver took advantage, and Siemian found Emmanuel Sanders for a 35-yard touchdown in the fourth quarter. On the next drive, Siemian found Bennie Fowler III for a 76-yard catch and run that appeared to put the game away. However, it was far from over, as that TD left too much time on the clock.

Chiefs quarterback Alex Smith had thrown for just 100 yards in the game up until that point, but it didn't matter. Smith passed for 67 yards on KC's final drive of regulation, culminating in this touchdown pass to Hill with just 12 seconds left.

In overtime, each team approached the red zone on their opening drives in overtime, but both had to settle for field goals. Denver then missed a 62-yard field goal attempt with 1:03 to go, allowing the Chiefs to get into field goal range themselves. They did just that, and Cairo Santos made the 33-yarder to win the game...by banging it off the upright!!

It was a devastating loss for the Broncos, who now fall two games behind the Oakland Raiders in the AFC West race. They will travel to face the Jacksonville Jaguars next weekend.

For Kansas City, they are now just one game back of the division-leading Oakland Raiders, and hit the road next weekend when they face the Falcons in Atlanta.